Good Time to Sell a Home

According to a report issued by the National Association of REALTORS® Research Group:

Recent Reports issued by the U.S. Census Bureau and the U.S. Department of Housing and Urban Development indicate that new home starts are down compared with last month as well as last year.  New home completion is also showing a downward trend month over month. 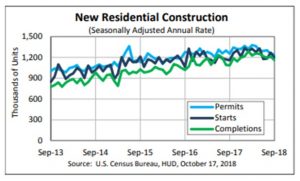 If demand for homes stays as is, in most areas of the country, or increases, then this is good news for homeowners selling their homes.