King of the Clicks: What Was the Most Popular Home of 2018? 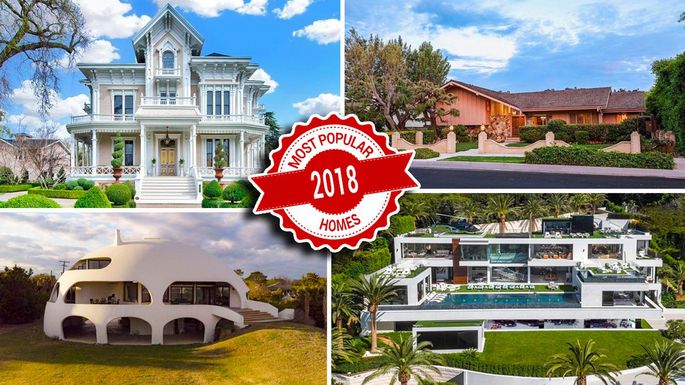 We love looking at all manner of homes—beautiful, weird, massive, tiny, outrageously expensive, or dirt-cheap. But what we enjoy even more is seeing which ones you like looking at. (Creepy, we know.)

Every week, we tally up your interest on realtor.com® listings and report back with the 10 properties you couldn’t resist clicking on.

Now that the year is almost done, we set out to pinpoint the 10 homes capturing the most views for the entire year. Our top home wasn’t a surprise by any stretch of the imagination, but it was nice to see the return of some familiar facades—some of which are still in search of a buyer.

Ready to take a walk down a unique (and expensive) memory lane? Join us as we gaze upon 2018’s most popular homes. Even if you’ve seen them before, we guarantee you’ll want to take another peek.

Status: Sold for $1.4 million in July

Why it’s here: Seeking a little solitude? Look no further than Cerro Gordo, a bona fide ghost town perched 8,000 feet up in the Inyo Mountains in Southern California. This 1867 silver mining camp is credited with providing some of the wealth that built Los Angeles—even if the town was abandoned in the early 1900s when the mines dried up.

Some buildings were restored, but many of them were left in a state of “protected arrested decay.” Although now mainly available for walking tours, the ghost town has been used as a shooting location for movies, including “Iron Man,” Rasmuson said.

The ghostly listing appeared on the market for $925,000, and scared up a ton of interest. It sold way over asking, for $1.4 million, in late July.

Why it’s here: At first glance, you might be surprised that this modest little number—45 miles outside Fort Worth, TX—made it to the top 10.

Just kidding. Everybody can see why it’s here.

This cozy 800-square-foot home, listed for just $89,900, got a blockbuster boost in views after listing photos surfaced featuring a T. rex doing everyday household activities (e.g., raiding the fridge, lounging on a bed, and mowing the lawn).

Aside from the Jurassic edge, the home features two bedrooms and one bathroom, and is situated on a lake with access to a community boat slip around the corner. (Can a T. rex water-ski?) The dino-mite sales tactic worked wonders, because the home sold in a month’s time.

Why it’s here: This rustic estate carved into the side of the Ozark Mountains captured attention for its storied history of renovations. What started as a doomsday shelter was transformed into an A-list nightclub that Michael Jackson and Elizabeth Taylor are rumored to have visited. The cave was then remodeled into a resort that hit the market for $2.75 million.

As far as we can tell, the enormous cave never snagged a spelunking buyer to write its next chapter. Instead, its owners are renting it out to tourists. Talk about a rockin’ vacation!

Why it’s here: Considered a “work of art,” this gorgeous example of Victorian Italianate architecture north of San Francisco took our collective breath away—and our “most popular” title—when it appeared on the market in April.

Built in 1885 for two pioneering ranchers, the historic home known as the Gable mansion eventually fell into disrepair. In the 1970s, though, it was given landmark status and was painstakingly restored with classic touches like sparkling chandeliers, hand-stenciled wallpapers, stained-glass windows, and hand-decorated ceilings. In the 1990s, the mansion again changed owners, who added a few modern features, including an indoor pool, theater room, an aquarium in the kitchen, and a gym.

Why it’s here: Even though “Fixer Upper” is off the air, we’re still a nation obsessed with it. In Season 2 of the show, renovation gurus Chip and Joanna Gaines worked their magic on this 1976 home, known as the “Faceless Bunker.”

Fans flocked to the listing when the house appeared on the market in June for a staggering $1.15 million. (Waco‘s median home price is $265,000.) Math is hard, so we refuse to do it for you, but suffice it to say there’s a big premium on this 4,113-square-foot home. A little too rich for even the biggest “Fixer Upper” fan’s blood, the asking price has now been reduced to just shy of a million bucks. Will you be the face this TV-famous home needs?

Why it’s here: Music lovers everywhere jumped at the chance to peek inside the Michigan Colonial that was home to Queen of Soul Aretha Franklin. Listed for $800,000 just weeks after the singer’s death in August, the gated estate was the first of many properties she owned to appear on the market.

The custom estate, built in 1990, has five bedrooms, 6.5 baths, and more than 4,100 square feet. According to the listing, the home has been pulled from the market, but it may make an encore appearance in the new year.

Why it’s here: When this dome-shaped house blew onto the market for the first time in May, it grabbed our attention for its one-of-a-kind perk: It’s hurricane-proof! Dubbed “Eye of the Storm,” the 4,000-square-foot home is made of a whopping 600 tons of reinforced concrete and was designed after Hurricane Hugo ripped apart its original owner’s abode in 1989.

While this storm-resistant structure garnered a rainstorm of clicks, buyers have yet to bite. Listing agent Michael Royal is still hopeful he’ll nab a unique buyer for this iconic home.

“I’m trying to connect with the person who really falls in love with it, and sees the work of art it really is,” he said.

Why it’s here: The posh Bel Air estate known as the “Billionaire” made a gigantic splash in 2017, when it hit the market for a mind-boggling $250 million—the country’s most expensive listing at the time. For good reason, we guess—it boasts three chef’s kitchens, two fully stocked wine cellars, 135 art installations, three theater areas, an auto gallery, and a helipad with helicopter.

This year, the megamansion was back in the headlines when a cool $62 million was slashed off its price. The shocker? The price reduction was not for a lack of interested buyers. An offer on the home fell through, so the 12-bedroom, 21-bathroom behemoth was relisted for $188 million. A steal, perhaps? We don’t know. We’ll never know. Sad!

Why it’s here: This Motor City masterpiece went on the market for $550,000 in March, and the internet went nuts. It’s not hard to see why: One peek inside will blow you away with over-the-top decor, kitschy knickknacks, custom cars, and other collectibles—all of which were included in the original purchase price (which has now been reduced to $375,000).

The intriguing interior is the brainchild of homeowner Ronald Nassar—known by some as Mr. Ronnie—who’s looking to downsize and leave his carefully curated time capsule behind. Will it be your treasure trove?

Status: Sold for $3.5 million in August

Why it’s here: This home is a facade. An evocative exterior. A national icon! This ranch-style home captured the memories of a generation of adults who grew up seeing a static image of the place during endless reruns of “The Brady Bunch.”

The interiors of the “Brady” home were filmed on a soundstage, but the actual home, with its memorable exterior—on the market for a brief period this summer—caused clicks to come flooding in.

It didn’t matter that the interior of this house was dated and a bit of a mish-mosh—the crucial element was the outside of the house. Altered a bit from how it appeared in the early ’70s, it was still easily identifiable as the iconic home. So much so that it is reportedly the second most photographed home in America, after the White House.

The immediate popularity resulted in a heated bidding war, with HGTV emerging victorious. The network paid nearly double the home’s asking price, but will recoup its outlay with a series based on the home’s remodel, set to air in 2019. The network’s designers will aim to make the home’s interior match the facade of this memorable TV residence.